Forensic Nursing is the hottest new field in nursing; where health and legal systems intersect.

16th Century: forensic medicine focused on cause of death
18th Century: midwives testified in court on matters like (gulp) virginity, pregnancy, and rape.
1992: First certification of Sexual Assault Nurse Examiners (SANE), and a new field was born.
The “mother” of forensic nursing: Virginia Lynch is recognized.
• An emergency room nurse
• Visited a crime lab in 1982
• Became obsessed with forensics

The great reward: salaries are high
Forensic nurses: salaries vary but can range from $54,000 to $205,000 annually
Average for all nursing specialties: $65,000
By hour: Nationwide it’s estimated that the hourly salary for a forensic nurse varies from $26 to $100 per hour.
Consulting hovers over the $150/hour mark. 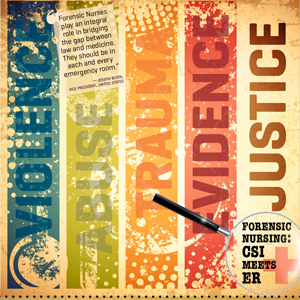 Our site does not feature every educational option available on the market. We encourage you to perform your own independent research before making any education decisions. Many listings are from partners who compensate us, which may influence which programs we write about. Learn more about us